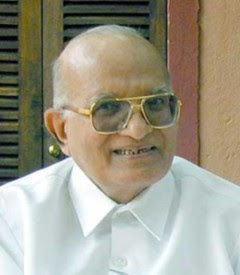 ( I am happy to inform my readers that Professor Kireet Joshi one of the greatest educationists, philosophers and yoga expert has kindly given his consent to contribute his articles and works on this blog, which will not only further enrich this blog in matters of yoga, philosophy but also benefit readers.)
Kireet Joshi (born on 10th August, 1931) studied Philosophy and Law in Bombay University. In 1953, he was awarded gold medal and Vedanta prize for having stood 1st class 1st at the M.A. examination. In 1955, he was selected for the IAS and posted as Assistant Collector of Surat in 1956 but resigned in the same year to devote his life to the study and practice of Sri Aurobindo’s Yoga at Pondicherry. He was responsible for the establishment of Sri Aurobindo International Centre of Educational Research at Auroville.

In 1976, the-then Prime Minister of India, Late Smt. Indira Gandhi requested him to advise the Government of India, particularly, to impart dimension of value-education to the entire system. Subsequently, in the same year he was appointed Educational Adviser to the Government of India and later as Special Secretary in the Ministry of Human Resource Development. He was also the Member-Secretary of the National Committee on Vishwabharati, under the Chairmanship of Dr. K.L. Shrimali. Subsequently, he was instrumental in redesigning and redrafting of the bill for Vishwa Bharati University, Shantiniketan.

He developed the idea of Indira Gandhi National Open University as also of Pondicherry University and the Bills for both them were drafted by him. Subsequently, both these universities came to be established.

In 1981, he was appointed Secretary of Auroville International Advisory Council, which consisted of the Union Minister of External Affairs, Director-General of UNESCO, Minister of Culture of Bulgaria and Shri J.R.D. Tata. He established Sri Aurobindo International Centre of Educational Research at Auroville.

He was Member of the University Grants Commission from 1982 to 1988 and also the Member-Secretary of National Commission on Teachers.

He played a major role in the establishment and development of the Indian Council of Philosophical Research. He shouldered the responsibilities of Member-Secretary of this Council from 1981-90, during which Indian philosophical tradition came to be encouraged and supported through original research and publication programme. Assisted Professor D.P. Chattopadhyaya in formulating a National Project on History of Indian Science, Philosophy and Culture (PHISPC), and worked as its Member-Secretary during its formative period from 1981-90.

Initiated and developed Rashtriya Veda Vidya Pratisthan, New Delhi which was later shifted to Ujjain and renamed as Maharishi Sandipani Rashtriya Veda Vidya Pratisthan (Ujjain, Madhya Pradesh). He served as its Founder Member-Secretary from 1987-93. He also framed and implemented scheme of financial assistance to Vedapathis and also for providing scholarships to students of the Veda and Vedic knowledge. He secured from the Government of India an endowment of Rs. 7 crores for this Organisation as a result of which it has been able to develop a number of activities connected with Vedic research.

He made valuable contributions to the field of education at international level and was a member of India’s delegation to UNESCO’s conferences in 1976, 1980, 1984, 1985 and 1988. He was elected Vice-president of International Commission on Education at Geneva for a period of two years from 1976-78. He was Chairman of UNESCO Committee on International Education for a period of four years (1983-87). He was Vice-Chairman of the UNESCO Institute of Education, Hamburg, during 1986-90.

The Institute of Advanced Studies at Shimla was redesigned in 1982 under the recommendations of the Kriplani Committee of which Dr. Kireet Joshi was the Member-Secretary. He was Member of the Executive Board of this Institute from 1983-89.

He has supported programmes of child education and advocated that the child should be the centre not only of the educational system but of the whole nation. He provided guidance and impetus to the Bal Bhavan movement in the country and was Member of the Children’s Film Society from 1974-77.

He was the President of Dharam Hinduja International Centre of Indic Research, New Delhi (Hinduja Foundation) from 1993 to August 2000; Chairman of Auroville Foundation, Auroville (1999-2004) and Chairman of Indian Council of Philosophical Research (ICPR) for two consecutive terms (5th June 2000 to 6th June 2006).

His edited work include: “The Aim of Life”, “The Good Teacher and The Good Pupil” and Mystery Excellence of Human Body. He continues to write on the themes connected with the Vedic literature, educational issues and Integral Yoga. He is Editorial Fellow of PHISPC and currently working on a volume entitled: Synthesis of Yoga.

He is recipient of 1989 award of the Indian Council for Child Education for outstanding contribution in this field. He is also recipient of the National Citizen’s Award for 1989. The degree of D.Litt (Honoris Causa) was conferred upon him by Rahstriya Sanskrit Vidyapeetha, Tirupati in 1996.

Kireet Joshi has studied French, Sanskrit and Hindi. Gujarati is his mother tongue.

Kireet Joshi is the Founder Managing Trustee of The Mother’s Institute of Research; Vice-Chairman of Indian Philosophical Congress (IPC) and recently he played a key role in the establishment of Vedic University at Tirupathi.
Posted by Mukesh at Wednesday, October 31, 2007

Hi.. Thanks for this informative article. I really liked it. I also came across this similar site with nice articles and videos on vedic prinicples - http://www.vichaar.tv

Thanks for the article. Kireetbhai is one of the greats who still walks the earth.
Arindam Gupta

This work is licensed under a Creative Commons Attribution-No Derivative Works 2.5 India License.

Mukesh
Welcome to my world of Tracts on Yoga and Consciousness. To view my profile, kindly see the Label: About.